Head on a Plate that Slipped, 2016. Ink, colored pencil and watercolor on paper collage, 12 x 9 inches. 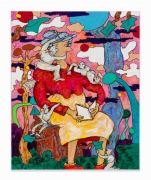 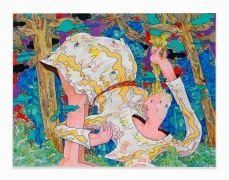 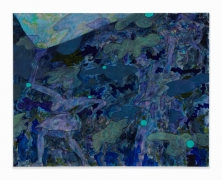 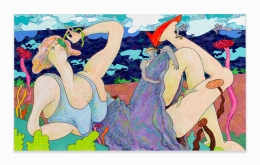 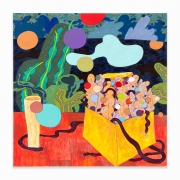 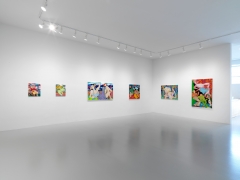 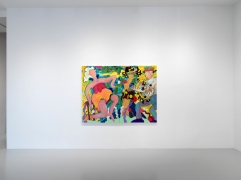 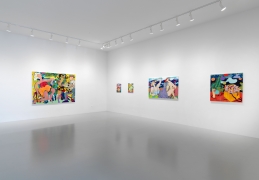 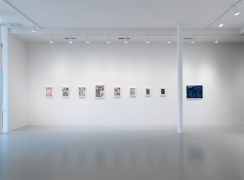 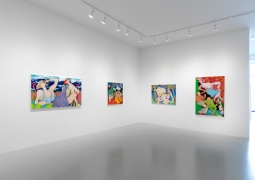 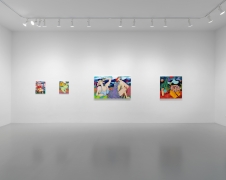 Rhona Hoffman Gallery is pleased to present our first exhibition with Gladys Nilsson, one of the foremost Chicago artists of her generation and a member of the Hairy Who, the venerable group that came to prominence through a series of radical exhibitions at the Hyde Park Art Center on Chicago’s South Side in the late 1960s. Featuring paintings and works on paper made in the last five years, the exhibition highlights Nilsson’s continued experiments with form, color, and figuration.

The works on view range from large paintings on canvas to intimately scaled watercolors and collages. In sprawling canvases like Repose (2017) and Painting Nature (2018), Nilsson offers her signature spin on the central tenets of the Chicago Imagist style: distorted figuration, densely layered compositions, and an electric color palette. Meanwhile, smaller works on paper like those from the “Head on a Plate” series highlight Nilsson’s sense of humor and whimsy, incorporating a playful mix of figurative drawing, abstract washes, and collaged elements. Nilsson’s newest featured works, Out After Dark and Still Scape (both 2019), depict abstracted and obscured landscapes replete with references to the body.

In light of renewed awareness of the Imagists—thanks in part to the Art Institute of Chicago’s 2018 exhibition “Hairy Who? 1966–1969”—this exhibition offers a look at an artist who remains connected with her historical lineage but has never stopped developing her unique visual language.

Nilsson is known for her densely layered and meticulously constructed watercolors and collages. Like many of the Hairy Who artists, Nilsson employed a type of horror vacui; many of her works feel filled to the brim with winding, playful imagery. Her work often focuses on aspects of human sexuality and its inherent contradictions.