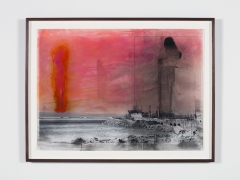 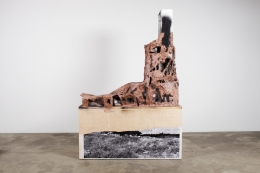 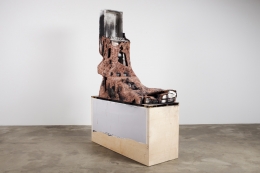 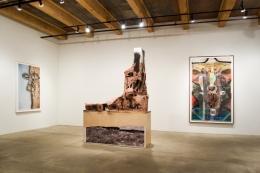 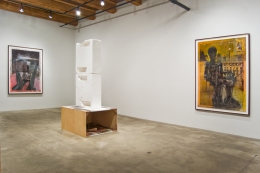 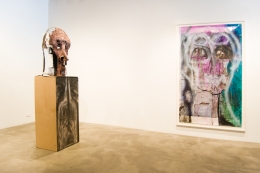 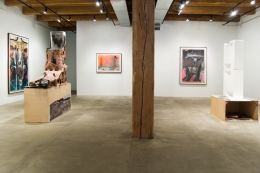 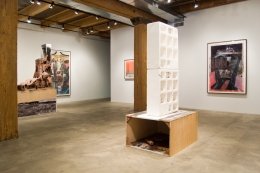 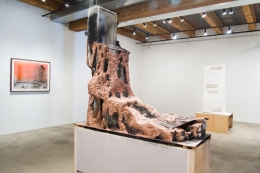 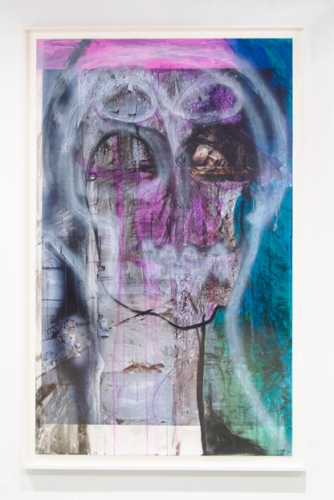 There will be an opening reception for the artist on Friday, April 1st from 5-7:30 pm.

Huma Bhabha’s sculptures and photo-drawings address universal themes of colonialism, war, displacement, and memories of home.  Made from discarded materials such as clay, chicken wire, leaves, Styrofoam, metal chains, paint and wood, the work in this exhibition evokes a sense of suspended creation and decomposition, as if salvaged from wreckage.

Jhukarjodaro, 2011, the largest sculpture in the exhibition, is an enormous truncated foot on a painted and collaged wood platform, bringing to mind the architectural ruins of a fairy tale gone wrong.  Commanding and erect, Jhukarjodaro also subsumes mesmerizing, haunting affects in the meticulous details of its cracked clay and chicken wire.  Purposefully left open and raw, Bhabha creates places for the viewer to enter the work.  Ripley, 2011, is a figurative sculpture resembling a tomb on top of a nest or incubator, alluding to a space pod protecting an unknown cargo as well as a gender marker.  At first glance grotesque, these sculptures suggest a lost utopia mirroring a collective anxiety.

Colossal heads and feet, both frequent images found throughout Bhabha's oeuvre, adorn several large-scale photo-drawings in the exhibition. Color and black and white photographs, primarily of Pakistan, are inked, collaged, and painted over with abstract forms that engulf images of desolate landscapes and industrial architectural rubble.  Traces of the likeness of Hollywood science fiction actors can be distinguished though smudges, erasures, and rough expressionistic marks in a layering of imagery suggestive of the complexities of history and the passage of time.  Bhabha works with materiality and scale, ultimately revealing unexpected beauty in depictions of decay, terror, and chaos.  Much like her sculptures, Bhabha’s photo-drawings culminate in more than an aesthetic juxtaposition of intimidating and fantastical romanticism.  Alongside suggestions of aliens, cyborgs, and a surreal future where ghost-like monuments and unearthly vistas overwhelm human existence, her work also reveals an acute awareness of  the present, a realization of the impermanence of materials and resources that are at hand in our contemporary world.

Huma Bhabha was born in Karachi, Pakistan, and currently lives and works in Poughkeepsie, New York. She was included in the 2010 Whitney Biennial curated by Francesco Bonami and Gary Carrion-Murayari, and was a recipient of the 2008 Emerging Artist Award at the Aldrich Contemporary Art Museum, Connecticut.