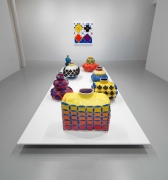 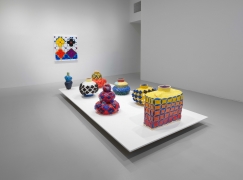 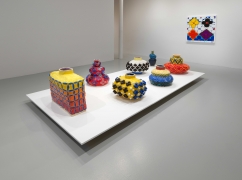 CHICAGO, IL—Rhona Hoffman Gallery is happy to present an exhibition of new ceramics by Judy Ledgerwood (b. Indiana, 1959), a series of vessel forms featuring the artist’s signature quatrefoil motif whose seductive impasto surfaces confront the superficiality of décor. Like the elaborately braided hairstyles that adorned caryatids—columns carved into the shape of goddesses, to prevent their necks from breaking under the weight of the stone entablatures upon their heads—the ornamentation in Ledgerwood’s works are both structural and embellished. Viewed in the round, the artist’s fragile yet durable objects resist definitions of craft and challenge comfortable categorization as either sculpture or painting. Hovering between the decorative and the utilitarian, each of the ceramics’ colorful gilding articulates the patterns that are often portrayed in Ledgerwood’s large-scale, wall-based paintings.

What we know of culture—of human history, the remains of daily life—we often know from ceramics. Objects of functional storage, ritual, devotion, and art made of wet earth once passed through a fire and now they tell us stories. For Ledgerwood, this recent body of work departs from the more conventional vase forms featured in previous exhibitions shown alongside her paintings. Installed upon a low pedestal, the six vessels compose a figurative garden through which our eyes weave around their masses.

Their exteriors are brightly keyed; hues of ultramarine, carbon, and oxide are set against primarily monochromatic backdrops, at times in gradients of yellow or milky white. The inner lip of each reveals a color that fades into the shadow of the cavern. Before being fired, the surfaces appear like frescoes—the dusty veil that results from pigment binding with plaster. After the firing process, the loose grid of shallow carved diamonds, thickly squeezed flowers, and patchwork line drawings coalesce beneath a glossy shine.

Variations on the quatrefoil symbol—a geometric pattern once found in art and medieval architecture in the Gothic and later Renaissance periods—have underpinned Ledgerwood’s work over the last decades. Throughout her work, the artist’s emphatic permutations of the floral pattern have surrendered to the imperfections of the hand, wavering in proportion and scale. While at times cubic in volume, many of the forms that carry this pattern quote the shape of a double gourd vase, a symbol of fertility developed during the Song Dynasty (960–1271 AD), as well as other eastern traditions of pottery.

In two of the objects, metallic lines of gold are drawn along haphazard cracks of the vessel’s surface - reparative technique known as the Japanese art of ‘kintsugi.’ The visual trace of this mending, a beautification in place of what would conventionally be considered a ‘flaw,’ instead critically draw our attention to their lustrous exteriors. Ledgerwood engages with this history of craft, further echoed in the gestural marks upon the surfaces of the vessels in destabilized veils of mark making, draping over their concave curves like tapestries.

Weaving together elements of historical pattern, the portrayal of female sexuality abounds in Ledgerwood’s works. Their scale prevents any one object from feeling ‘empty,’ a term that is often grafted onto the metaphor of women as entities that need to be filled. As individual forms, as well as in their collective presentation, Ledgerwood’s ceramics express a corpus that is inventive and resonant with the artist’s pattern-based logic. 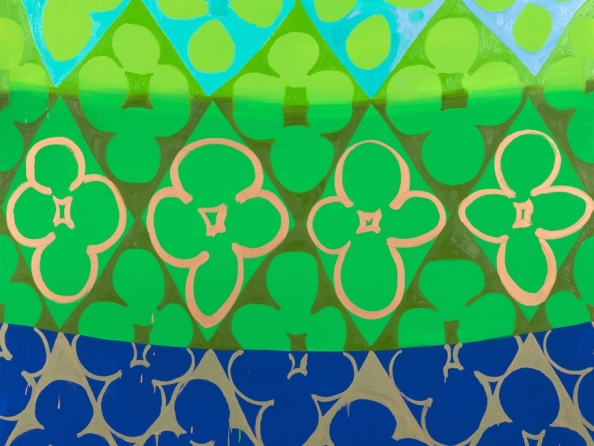 Judy Ledgerwood
Back To Top