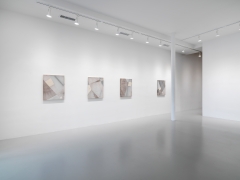 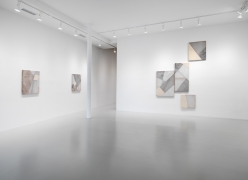 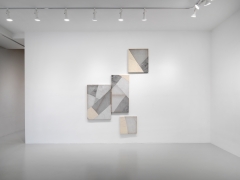 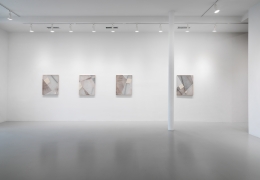 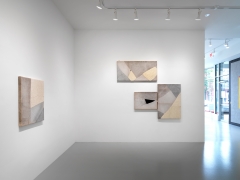 “Moreover, it is vital in what order I array
The different letters that make up my lines, in what position
Because the sky, the sea, the soil, the streams, the shining sun,
Are drawn from a single pool of letters, and one alphabet
Spells barley, bushes, beasts, words not identical, and yet
With certain letters shared in common, for what really matters,
What makes a world of difference, is the arrangement of the letters.
The same goes for the physical. For when you rearrange
Atoms, their order, shapes and motions, then you also change
What they compose.”

—Lucretius, from The Nature of Things, 1st Century B.C.

Rhona Hoffman Gallery is pleased to present our second exhibition with Martha Tuttle, The Dance of Atoms. Taking inspiration from early Greco-Roman understandings of molecular matter, Tuttle’s new textile-based paintings are composed of hand-spun wool and linens dyed with mineral pigments. Hovering between abstraction and materiality, the works explore the notion of relational arrangement, rather than the inherent self or object, as a mode of understanding the physical world.

Comprising individual paintings and large-scale multi-paneled compositions, the works in the exhibition emerge from intertwined processes of literary inquiry and material investigation. Early ideas of the shifting interactions of atoms, as expressed in the writings of Epicurean philosophers and their Roman follower, Lucretius, have given form to the material terms with which Tuttle makes her paintings; for instance, “how a rock and a piece of linen colored by mineral pigment can take on two vastly different visual resonances,” she describes. “Or the way wool forms a line drawing—no two alike—solely by and with fingertips, through the process of spinning.” Just as important for Tuttle are the spaces between the panels, some wedged open by crystals and minerals, which direct our attention to empty space as merely another form of matter. “The difference is density, rather than absence,” she says.

Tuttle’s work disrupts the traditional binary of abstraction and figuration, typically thought to reside in the spirit and the body, respectively. Through her use of open, organic processes and materials, Tuttle proposes a symbiosis between the material and spiritual realms—a constant flux of merging and recombination.

Martha Tuttle was born in 1989 in Santa Fe, New Mexico. Solo and two-person exhibitions include Geukens & DeVil, Antwerp; Luce Gallery, Turin; Tilton Gallery, New York; and Rhona Hoffman Gallery, Chicago. Among others, she has been in residence at the Rauschenberg Foundation, Captiva, FL; the Sharpe-Walentas Studio Program, Brooklyn, NY; the UCross Foundation, Clearmont, WY; and A-Z West, Joshua Tree, CA. Tuttle earned her MFA in Painting from The Yale School of Art in 2015 and her BA at Bard College. She lives and works in Brooklyn, NY. 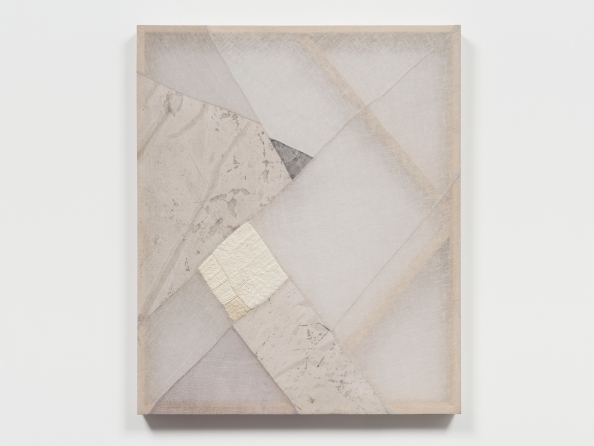