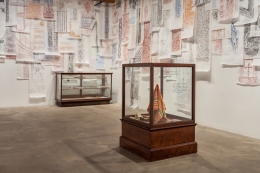 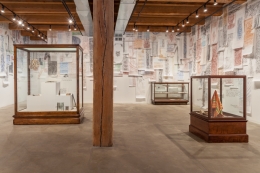 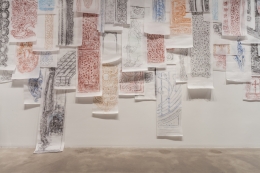 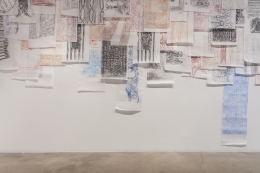 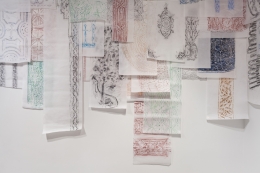 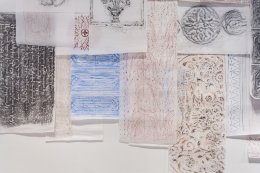 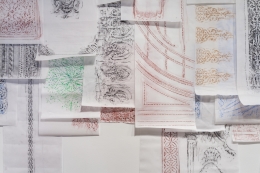 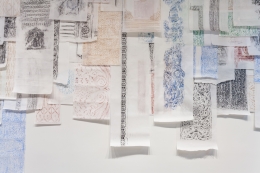 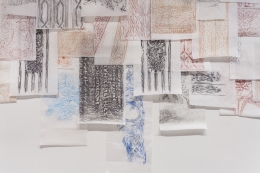 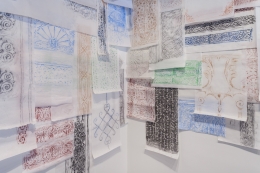 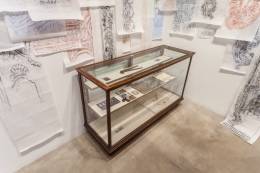 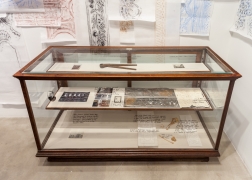 For its second solo exhibition with Michael Rakowitz, Rhona Hoffman Gallery is honored to present The Flesh Is Yours, The Bones Are Ours. Originally developed for the Istanbul Biennial in 2015, 100 years after the Armenian Genocide, the project revives the culture of Armenian craftsmanship in Turkey through Art Nouveau architecture. Rakowitz mined the history of the fin-de-siècle style to highlight the Armenian craftsmen whose hands shaped Istanbul’s ornamented facades, just prior to the tragic massacre of Turkey’s Armenian population. This compelling installation poetically connects historic buildings from the artist’s hometown Chicago, such as Louis Sullivan’s Garrick Theater and the Chicago Stock Exchange, to make a repressed cultural history personal and relevant on a global scale.

“The flesh is yours, the bones are ours” is a customary Turkish phrase that acknowledges a teacher’s influence, used for instance when a youth was given to apprentice with master craftsman Garabet Cezayirliyan. In ateliers like Cezayirliyan’s, Rakowitz learned how architectural adornments were produced using a plaster aggregate of ground-up animal bone for strength. The artist then worked with the remaining Armenian community to collect frottage rubbings of Istanbul’s decorations and cast new designs in local ateliers. Cutting deeper into the past, Rakowitz used bones from livestock descended from Armenian-owned farms and dog skeletons excavated from the island of Siviriada, where 80,000 of Istanbul’s dogs were exiled and left to die in 1910.

In its first U.S. presentation, The Flesh Is Yours, The Bones Are Ours spans two venues: Rhona Hoffman Gallery presents an immersive installation of frottage rubbings and poetic archival research assemblages that tell personal and architectural narratives from Chicago and Istanbul, while the Graham Foundation features the newly-created architectural ornamentations. Characteristic of Michael Rakowitz’s artistic practice, a specific core narrative invites broader discussion around the transmission of knowledge, silenced histories, and tradition as resistance against cultural erasure.

Michael Rakowitz is an artist living and working in Chicago. He received his BFA in sculpture from Purchase College, SUNY, and his MS in visual studies from MIT. His work has appeared in venues worldwide, including dOCUMENTA 13, PS1, MoMA, MassMOCA, Castello di Rivoli, the 16th Sydney Biennale, the 10th Istanbul Biennial, Sharjah Biennial 8, the Tirana Biennale, the National Design Triennial at the Cooper-Hewitt, and Transmediale 05. Solo exhibitions include the Tate Modern in London, Lombard Freid Gallery in New York, Trafo Gallery in Budapest, and Kunstraum Innsbruck. Rakowitz is the recipient of a 2012 Tiffany Foundation Award; a 2008 Creative Capital Grant; a Sharjah Biennial Jury Award; a 2006 NYFA Fellowship Grant in Architecture and Environmental Structures; the 2003 Dena Foundation Award; and the 2002 Design 21 Grand Prix from UNESCO. His work features in major private and public collections, including the Museum of Modern Art, New York; Neue Galerie, Kassel, Germany; the Smart Museum of Art, Chicago; the Van Abbemuseum, Eindhoven, the Netherlands; the British Museum; the Kabul National Museum, Afghanistan; and UNESCO, Paris. Rakowitz is professor of art theory and practice at Northwestern University.

Michael Rakowitz would like to acknowledge the following people for making The Flesh Is Yours, The Bones Are Ours possible: 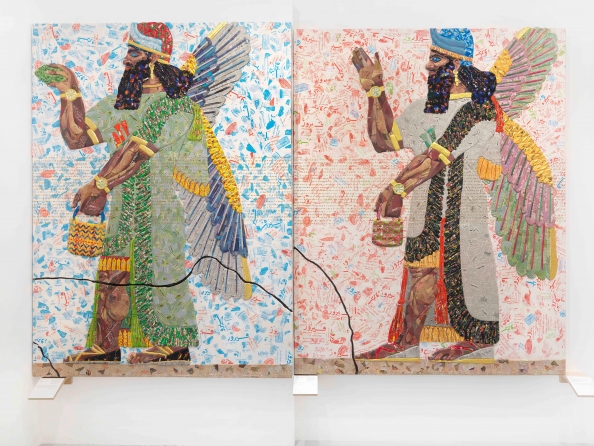